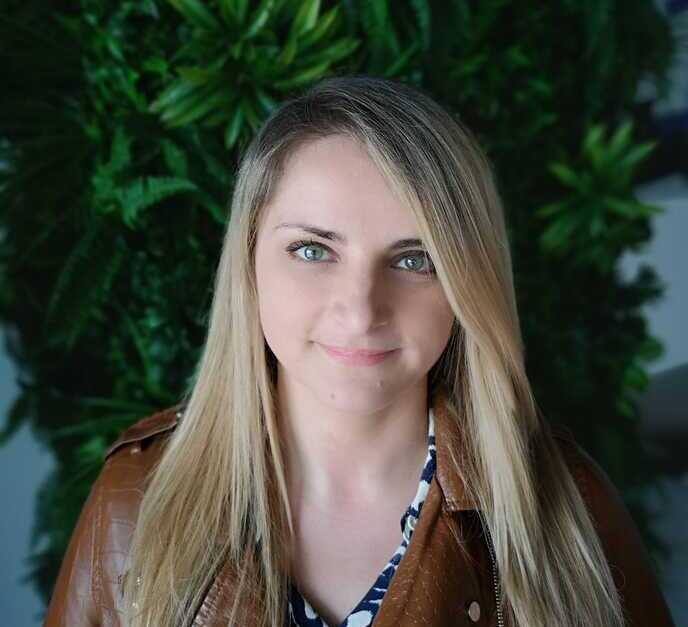 “I think what matters is that everyone feels they can be themselves every day at work without feeling in any way that they are different or treated differently.”
When we launched our Women@Comdata initiative, we said we would introduce you to some of the inspiring women working across Comdata. Here’s one of them: Monica Butea, Director of Operations at Comdata Global Clients Division. Monica Butea joined Comdata at the beginning of 2020, just before the Covid-19 lockdown, and her role includes responsibility for Comdata’s multilingual hub in Bucharest and for service delivery for global clients. She’s worked in Customer Management BPO for over 16 years, starting her career as an agent and working her way up through different roles and companies. We’re delighted that Monica has shared her experiences and views on customer management BPO, her own career, diversity, and how to be a successful leader. Whether you’re male, female, starting your career or a senior manager, she’s got some valuable insights for you.

First of all, what attracted you to your current job at Comdata?

For me, the really exciting aspect of joining Comdata was the opportunity to open up a new division here in Bucharest – starting from scratch in terms of the teams, the offices, the customer relationships, and everything else.

And what’s made you most proud during that process?

In terms of achievements, it’s the fact we have launched two completely new clients for Comdata – and that we did so in 2020 during the craziness of the pandemic. One of the clients wasn’t in a huge rush, but the other wanted to move quite fast – it was around 8-10 weeks from go-live to handling the volume.

That was a challenge, because as a new division we didn’t have an existing team that could simply move from working together to work from home. We put the team together entirely online, they’d never met each other or worked together, and we had to achieve bonding through virtual events and meetings only.

I’m so proud that we still managed to successfully launch these teams and the new and successful partnerships with our clients.

Who are the clients?

One’s in the insurance sector and one is in the tobacco sector.

Both relationships are up and running, and also expanding. Currently, we’re supporting them on three countries each, but they’re both adding new countries over this year and next, and also new language capabilities.

At the moment we are covering French, German, Italian, English and Spanish for them, but we expect to add more languages, from Lithuanian and Polish in northern Europe to Greek in southern Europe.

How is the mix in your team  – are your colleagues mainly men or women?

My team has a very good mix of men and women; we also have lots of different nationalities, a few members of the LGBTQ community, and a mix of ages: from age 20 to 67!

I think what matters is that everyone feels they can be themselves every day at work without feeling in any way that they are different or treated differently. For me this is the most important thing. It’s one of the things I love most about my job and this type of environment – we have so many different types of people from different backgrounds, and it just makes it so interesting. I love it.

Is this gender balance and diversity quite typical in your own market?

I think that in this company and this industry in Romania, we are fortunate enough to have quite good opportunities and gender equality for women, and we have quite a few women in leadership, including myself.

And if I look at the leadership in Comdata itself, we have three women on the Exco group, and there are a lot of women leaders in pretty much all the countries. So I think it’s a solid mix, and that makes me happy.

In your own career, have you experienced any issues around gender equality or diversity?

Honestly, I think this industry is very balanced. In the companies I’ve worked with and the clients, the mix of people has been very diverse and equal – although I know there are other companies and industries that might be more male-dominated.

But of course, I have sometimes come across certain individuals with a tendency to show a higher level of respect for a male counterpart and I think that in certain audiences or forums, women have to struggle a little bit more.

What can we do about that?

It’s very difficult to change. I think it’s a structural mindset in society, and we have to look at the way we educate our girls and boys. I think we maybe teach boys and girls differently, supporting boys to be more adventurous, but not doing the same with girls.

When I was growing up, I was so scared of making mistakes – I wanted to be good all the time. But in reality, we learn by making mistakes, and then doing it better next time, and we shouldn’t make our kids scared of that.

This is what I am trying to do with my own daughter, she’s still young but these things are taught early on. I want her to be able to stand up for herself and not learn to be apologetic, and I want her to understand that it’s OK to take risks, make mistakes and learn all the time.

And in the workplace, how do you think diversity can be promoted?

I see two main ways. One is the way leaders act at work. You have to walk the talk. I could go into a room and show slides about diversity and numbers, but if I go out of that meeting and I don’t behave in the way that I expect everybody else to behave, those slides are not going to make any difference.

Secondly, it’s important how HR and leaders respond when they observe any kind of behavior that is discriminating or dismissive of any other groups: you cannot just let it happen. If anybody is out of line, you have to address it right away.

So those, for me, are both keys.

Initiatives like Women@Comdata are also going to help promote diversity

Yes, and I am one of the people championing the initiative in the company.

We’ve already made good progress on that. We’ve pulled out data from HR to see where we stand – the mix of genders, age groups, pay ranges, promotions, how many women return from maternity leave etc.

We also looked at attrition rates, which was interesting for me. The attrition rate is higher in men than in women, which I think is consistent with my point earlier about women taking fewer risks.

And then we’re doing a survey across the company –that’s the pulse check that we need. After we get the survey responses analysed, we’ll design some actions which will be supported. One thing I am very happy to see with Women@Comdata is that our CEO Maxime Didier and Patrice Mazoyer, our Group Chief Transformation & Integration Officer, are both sponsoring the program, so it has a lot of visibility and support in our Exco Group.

So, final question: based on everything you have told us, Monica, what would be your advice to someone just starting out in their career?

They shouldn’t be scared to try new things, to learn, to make mistakes, to go on a path. If they discover it’s not really what they want, they can always change it. I’d also encourage them to take risks, and feel there’s no limit to what they can achieve.

My other advice to women in the workplace would be to work with themselves. Sometimes we have ‘internalized misogyny’ due to the way we were raised, so we need to work at ourselves, and towards that kind of change in society. It’s not easy, it’s a lot of work but I would give that advice for sure.

Back to Our People
Meet other talented people

Please, don't be shy. We would be pleased to help you!

What do you want to talk about ?

Our Services
Career
Press
Other